One of the highlights of this year’s Pendomonium conference was the opportunity to honor some of our most creative and enthusiastic customers. Each year, we select a group of companies who exemplify Pendo’s core values, who push our platform to new levels, and who impress our founding team.

Here are the winners of the 2019 Pendo Customer Awards:

**MVPs were nominated by their customer success managers for being active members in our communities and Pendo advocates within their companies.

These individuals have attended and/or spoken at Pendo events, actively participated in our Pendo Friendos and Pendomonium Slack communities and have grown usage of Pendo at their organizations. Show Me the Data (Most Creative Use of Data) | Sponsored by Node.io

Rapid7 is a longtime Pendo customer, with many Pendo wins under their belts. Most recently, they ran a campaign to target users to post on their behalf in a public forum, and were able to increase participation in the forum by 17%. Pendo has also given Rapid7 the ability to capture more (not to mention higher quality) feedback from larger and more diverse groups of users. The Rapid7 product and UX team used to rely on customer success or sales team members to identify candidates for beta testing, feedback, customer advocacy, or user research. Now, they deploy Pendo guides and surveys to reach their customers directly. RingCentral used Pendo guides to create highly-targeted onboarding experience and then A/B tested the impact with users. In one week alone, they saw a 15% increase in retention among users who saw the guides versus those who did not. After five weeks, that number grew to a 20% increase in retention. Jamf leveraged Pendo to gather valuable feedback on an upcoming change in their product. First, they segmented their customers to target only those who had volunteered to participate in beta and research programs. Then, they created a guide with a clickable prototype that walked that segment of users through the changes, followed by a three-question survey. With 90% of guide recipients giving the new experience a four or five-star rating, this pre-release gave the team confidence to release the change to all customers. It also drummed up a whole lot of excitement from those initial beta testers. Most Innovative Use of Pendo | Sponsored by Strikedeck, a Medallia Company

Verizon Connect used Pendo guides and custom HTML to build a personalized, automated demo, replacing costly in-person product demos with a self-serve way for prospects to experience the product and view pricing and plans. Because the guides were easy to customize with the company’s own branding, the entire experience felt like it was an integrated part of the Verizon Connect platform, not just a pop-up laid on top of it.

After their sales team identified the need for a feature they felt would dramatically improve customers’ ROI, the product team at Commissions Inc. developed their most successful and widely adopted feature to date: Behavioral Messaging. In ensure a successful launch, the team created four Pendo walkthroughs and a banner announcement to drive adoption. Now, 83% of clients use the feature, making it the most successful product launch in the company’s nine-year history. But the excitement didn’t stop there—one CINC customer shared that Behavioral Messaging earned one employee a $15,750 commission check in less than 24 hours after turning the feature on. Most Impactful ROI | Sponsored by FullStory

The first Pendo guide that Navex Global ever launched reached 70% of its customer base in the first 24 hours. With that single guide, Navex went from touching 300 users in a week via email, to 24,000 in a single day. This realization led Navex Global to revamp their entire release notification process. Since then, the team estimates that Pendo saves 50 hours of work every six weeks across a team of five people. The team also started using guides to notify customers of bugs — deflecting up to 1,000 support tickets within six months.

**Company award winners were selected from a public submission process as well as Pendozer nominations. Winners were chosen by a committee of Pendozers across customer success, marketing and sales, and weighed based on match to each award category and overall impact on their organization. User of the Year

Danny Villarreal, director of customer experience at JungleScout, is a true Pendo champion. He logged into Pendo 272 out of 365 days in the last year, and spent over 7,700 minutes in the app. Danny also leads our advocacy community, Pendo Friendos, with a whopping 8,695 points and 63 acts of advocacy. 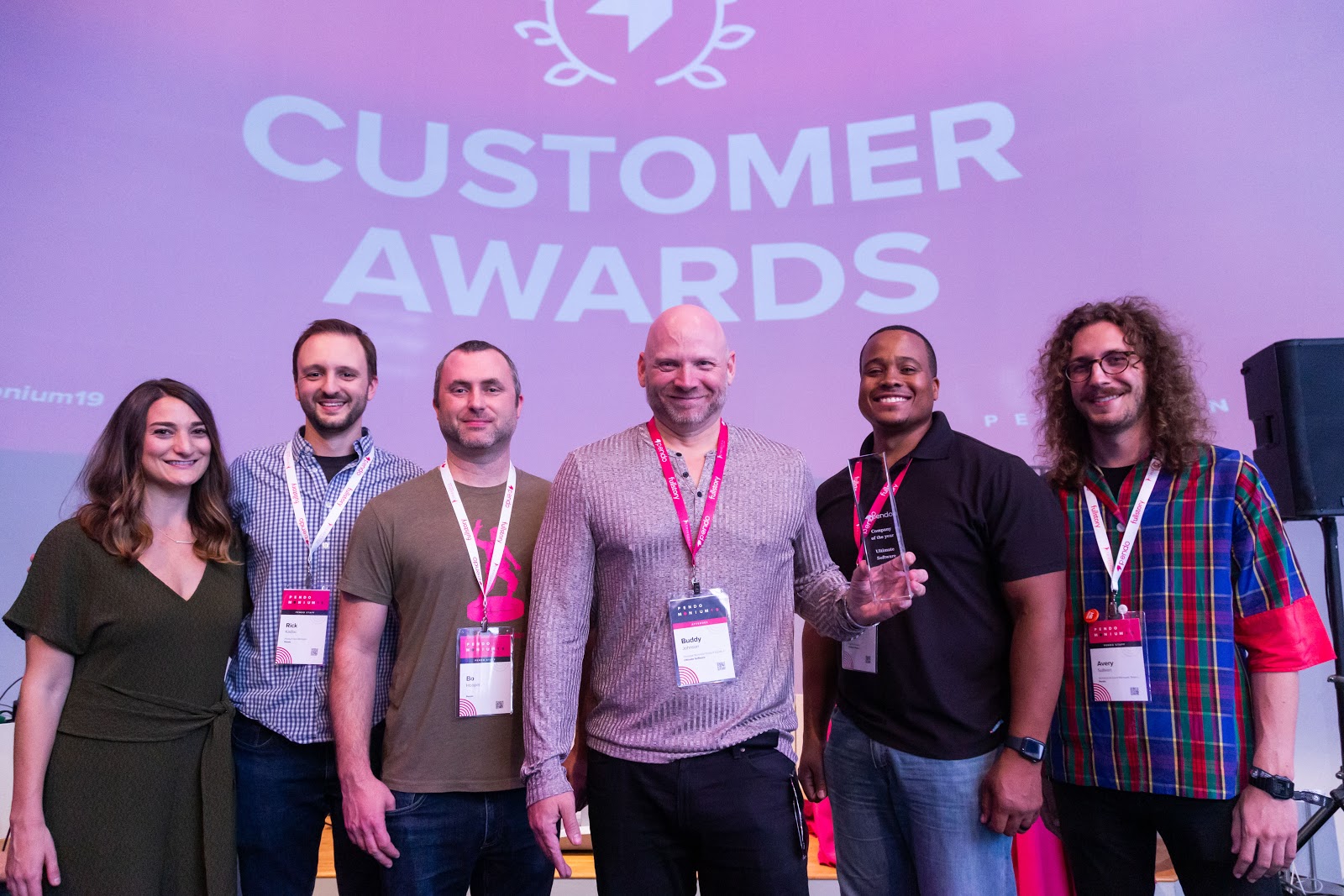 Company of the Year

Ultimate Software is an ultimate Pendo customer, with more than 354 internal users of Pendo, more than 60 guides live with nearly a million guide views in the last 30 days. They are also users and advocates of Pendo’s NPS functionality, using NPS scores and feedback to help improve their software products.

**Founders awards are chosen by Pendo’s four founders, and typically recognize an individual and a company that has made a big impact on their organizations by using Pendo, and serve as champions for Pendo, both inside their companies and externally.